"On a Day That Has No Name," a short apocalyptic fantasy story, and "The Voices of the Snakes," my myth retelling (and a rewrite of a Very Old Karina Story without so very much angst), have both sold to Sean Wallace. I think he's looking to place them in Fantasy magazine, but from what I understand Jabberwocky magazine is also an option. Either way -- WOOHOO!!

What a wonderful way to round out 2005! Now if you'll excuse me, I must return to cheering and jumping about.

Christmas Eve it rained. Christmas Day it rained ... until about 9:00, when the rain turned to snow and the snow just didn't stop. And in the strange wonder that is our local weather, we totally got clobbered here at New House, when but a 10 minute drive south from us got but the lightest dusting of snow.

Silly me, thinking that the snow would soon vanish, I got up early on Boxing Day (this year renamed Doctor Who Day in honour of The Christmas Invasion, woohoo!), pulled on my coat and hat and my mother's boots all over my pajamas, and went tromping around to get pictures before all the lovely snow fell off the pine branches. Little did I know that the snow would stay, looking as white and beautiful as every, until today ... when it started raining again.

This is a picture taken standing beside the garage at New House, looking down the (not-yet-cleared) driveway to the road. 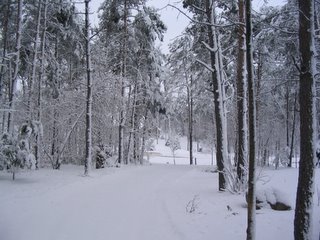 Had a lovely Christmas, which was hectic and loud and cheerful and all those things that such holidays usually are. Have I been very productive these last few days? Nope, not really. I've chatted and ate lots, baked jam cookies and watched The Christmas Invasion. (Twice. Also made my first true attempt to convert my mother into a Doctor Who fan, with pleasing results.)

I know I have some important things coming up -- I need to get writing, on the novel but also on a story whose deadline is fast approaching, and I have a few other little related projects that demand attention, and some non-present jewelry making might be nice, as well as the whole returning-to-work thing. Clothes shopping would be good, as would shopping in general. But for now I think I'll stick with the cookies, curl up with the still incomplete afghan and a Bujold novel and watch the rain attempt to melt a foot of snow.

After a December of snow, cold and more snow, southern Ontario has greeted the holidays with a cheerful forecast of rain, sleet and above-freezing temperatures. I must say (and remember this, because it'll be the last time I say anything of the kind for quite a while), I rather preferred the snow.

But I'm safe and happy at my parents'/grandparents' house, busily finishing preparations for the relatives to arrive tomorrow. My father and I spent much of today out grocery shopping and the like. As we hurried through the very crowded, very wet, very slushy Zehrs parking lot I began to sing, "It's beginning to look less like Christmas, the more and more it rains ..."

Otherwise, it's beads, baking, beads, beads, wire, beads and wire. I have discovered the joy of memory wire. It's like making jewelry out of a slinky.

I'm exhausted. Got very little sleep, as my body kept waking me up to ask, "Work time yet?" But the day went very quickly -- flew by, in fact -- and was actually fun. Or, you know, as fun as learning about accounting can possibly be.

The office is fast paced and interesting, and a total change (shock) from where I've worked before -- in a good way. It's definitely going to take a little while until I really have a handle on what's happening in this office -- things go so quickly and change constantly -- but I'm excited about learning more, progressing, figuring things out. Though I'm about to set my alarm and fall into bed, I'm actually looking forward to going back tomorrow.

I Thought I Should Mention ...

I'm told I need to update. Apparently the non-aggregating people are getting mighty sick of seeing that last Doctor Who post over and over again. Apologies. I have to admit, I've been in a very non-communicative state this past while.

Oh, I'm fine if you catch me in person. I'm even pretty good if you get me on the phone (and don't catch me in a moment of complete job-related panic and terror -- sorry about that one, Susan). But email? Blog entries? Even leaving comments on others' blog posts? Nope. Haven't been doing so well in that regard. Winter has arrived and my body attempted to hibernate. Need I say more?

But I do have news, important news, even: I have a job. Yes, me, Karina the Unemployed Girl Wonder has once again found gainful employment.

I went on an interview two Thursdays ago, and then another one on Tuesday, and then another-another one on that very same Tuesday. Clearly I managed to convince them that I am indeed an intelligent and generally capable person who will be able to learn what I need to learn, do what I need to do and generally work tirelessly (and this in spite of the fact that I've been told that I sound like I've just woken up by about half of the people who have called me, potential employers and friends alike, and declared to be very "subdued." Terrified by job-things and attempting to hibernate is closer to the truth).

What's the job? To be honest ... it's hard to say. The job posting that I responded to called the job title "Jack/Jill of all trades." There is accounting, there is admin stuff, there is staffing, there is proposal writing, there may be sales-stuff in the future, and I've heard rumours about helping with a Christmas card mailing. All this is for a small but powerful consulting firm downtown. (Right by a subway station, woohoo!) There seems to be many different directions that the job could take me, lots of opportunities for growth, and the work environment seemed very good for me: small, busy, very open and honest and casual. Wearing jeans to work is not only allowed, it's the norm. I'm also now the only female employee, which promises to be both interesting and entertaining.

Officially I start in January, though I will be working next week as a contractor, learning what I can learn before the office closes down and everyone leaves on holiday. I am excited and terrified and things I don't even know how to name.